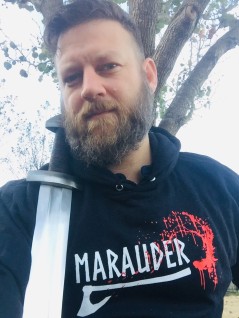 So…David…where is that next novel?

Well valued reader, I’m glad you’ve asked. The past year has perhaps been the most demanding from my Corporate Job since I joined them nearly 6 years ago. Quite frankly, I’ve had nearly no time to write. I was able to squeeze out half a rough draft on the fourth novel in the “Marauder” series and even started writing a new novel series called “The Crimson Order” which focuses on the Crusades, the Knights Templar and Vampires. Unfortunately, neither of these novels have reached a completed rough draft.

But David, why don’t you just stay up until 3a.m. writing like you used to?

Another great question. Simply put, my day job (technically a 24/7 job) has sucked the life, motivation and energy from me. It’s not that I don’t find any joy in my day job, I do, it’s just incredibly demanding as of late and has left my personal pursuits in the dust bin. Not to mention that sleep deprivation returns me to the Marine Corps days of being a human with zero empathy, a less than sunny disposition and a tendency towards violence with a smile.

What about your new publisher, Next Chapter? How is that going?

Next Chapter has certainly helped to increase my visibility and increased what I will call “steady sales”. They even started publishing some of my works in audible which is really cool. Unfortunately, with the cut my publisher takes I am actually making far less money than I was as an independent author (Not that I made much money anyway). I would like to think if I could be more productive and put more works into their market channels that it would speed my success but the truth is I would have to sell an INSANE number of novels to even see a basic, simple, reasonable living income… My contract is up in June and as you can probably tell from my tone (deep disappointing tone, like Gandalf saying drums, drums in the deep kind of tone..) I will more than likely return to independent author status. To further complicate things, the IRS will probably decide that since I have not returned any significant profits for the past several years that this is in fact a “Hobby” and not a reasonable business thereby allowing them to once again increase my taxes. (Very bleak, yes I know but we will sally forth!).

So with all of that “Bah-Hum Bug!” where do you go from here?

For starters, don’t feel terribly sorry for me. My personal life as it stands is FANTASTIC and more good things come around the bend each day (will fill you in later). It’s just playing Bruce Wayne during the day and Batman in the evenings is a challenging affair. I am making every considerable effort to return to writing. As it stands I would still like to revise my original novels since my skill set has increased significantly and I want to give my readers the world building experience that they deserve. I am taking modest steps to move ahead and working on consistency. Writing is not something I can escape, nor do I care to be free of it’s curse. I simply want to bring a bit more balance to my life. Asking to be a full time author is a BIG ASK, I know, but one that I am still willing to work for.

Thank you all so much for your continued support. I hope to place you all in a state of awe with the works to follow. Just hang tight and perhaps we can watch Ragnarok together.